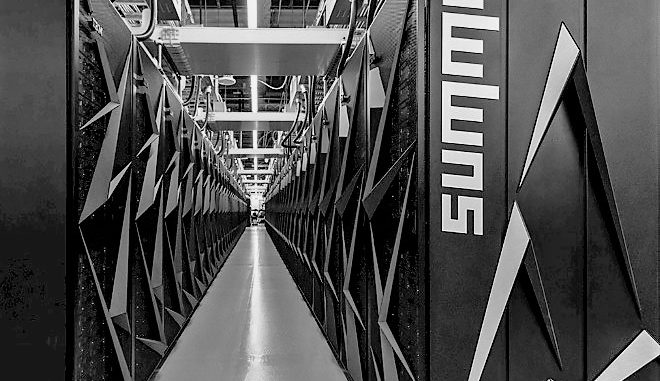 The 2018 HPC server sales also represented a 15 percent increase over 2017, which Hyperion also characterized as a strong year. In retrospect, the 2018 surge looks more like a continuation of the robust fourth quarter of 2017, which up until then had been fairly sluggish. Overall, Hyperion is bullish on the HPC market for the foreseeable future, with Joseph saying that “big data, along with AI, machine learning, and deep learning, are bringing a lot of new users and buyers into the space.” 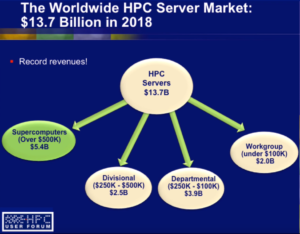 The supercomputer segment, which is comprised of systems that cost over $500,000, had a particularly strong year, with sales of $5.4 billion – a 23 percent increase over 2017. Joseph said they really weren’t expecting to see that sort of growth until the pre-exascale timeframe. Keep in mind, though, that since the low end of this category is half a million dollars, it is not only leading edge systems that fall into this category.

That said, really big supercomputers were much in evidence in 2018, with the top-ranked “Summit” and “Sierra” systems adding more than 300 peak petaflops to the US Department of Energy’s HPC arsenal. Other new top 10 systems deployed in 2018 include the AI Bridging Cloud Infrastructure (ABCI) at Japan’s National Institute of Advanced Industrial Science and Technology and the SuperMUC-NG machine at Germany at the Leibniz Supercomputing Centre (LRZ). According to Joseph, top systems are growing again after four and a half years in the doldrums.

Although $5.4 billion worth of supercomputers were sold last year, that doesn’t mean the other segments were lagging. In fact, all four categories recorded growth in 2018 compared to the previous year. Departmental systems, which cost between $100,000 and 250,000, generated $3.9 billion in revenue, which represents a lot more systems than in the supercomputer category. Same goes for the workgroup systems of $100,000 or less, which accrued $2 billion in sales last year. 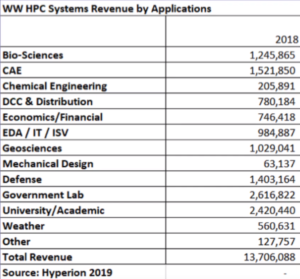 By application category, server revenue pretty reflected much what it has been historically, with the usual suspects of government labs and academia at the top. Together they spent over $5 billion of HPC servers in 2018. Other top applications include CAE, defense, biosciences, and geosciences, with each investing more than a billion dollars on HPC servers last year.

The vendor breakdown of revenue has been more volatile, however. “In the last four to five years, we’ve seen more changes in vendor shares than we’ve ever seen in the past,” observed Joseph. A lot of that can be attributed to acquisitions involving some of the biggest players over the last several years, including the sale of SGI to HPE and Lenovo’s purchase of IBM’s x86 server business.

HPE and Dell, the two top sellers of HPC servers, saw strong growth in 2018. HPE revenue increased 13 percent year-over-year, while Dell grew 22 percent. Sugon also had a big year, increasing its server revenue by 32 percent (more than $100 million) in 2017. A good chunk of that was likely due to three new Sugon-built multi-petaflop system that were installed in 2018: two for the China Meteorological Administration and one for Sugon itself. 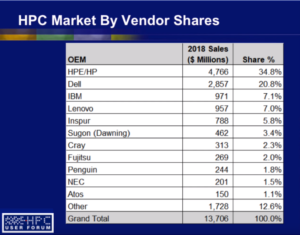 But in this regard, the biggest winner was IBM, whose revenue jumped by a whopping 68 percent (more than $590 million) in 2018, just enough to displace Lenovo as the number three HPC system provider. We’re guessing the big boost in IBM’s revenue can largely be attributed to the money accrued from the sales of the Summit and Sierra supercomputers, both of which came into production last year.

Hyperion’s five-year forecast looks fairly rosy as well, with the analyst firm projecting strong growth across all its HPC server categories, from supercomputers down to workgroup systems. In aggregate, server revenue is expected to deliver a compounded annual growth rate (CAGR) of 7.8 percent from 2019 to 2023. As in the previous five-year projection, the supercomputer segment is still the fastest growing at 8.4 percent, growth, but that’s down significantly from the 14.5 percent CAGR Hyperion pegged it from 2018 to 2022.

“The difference is we are not going out to 2023,” Joseph explains. “If you look at 2022, there’s this massive ramp up and then it goes roughly flat. Don’t view that as negative. The market is almost doubling in size from a couple years ago, when it was $4 billion.”

For the entire HPC market, which includes hardware, software, and services, Hyperion is forecasting a 7.2 percent CAGR over the next five years, reaching nearly $40 billion in 2023. All areas are expected to grow at nice clip, with hardware outpacing software and services.

One interesting factoid here is that storage revenue is now pegged at a relatively modest 7.0 percent growth rate for this period, whereas last year’s five-year projection had it at 10.3 percent. Joseph offered no explanation for the decline in storage growth during his HPC User Forum summary. So if that’s a burning question for you, we guess you’ll just have to go buy the full report from Hyperion.